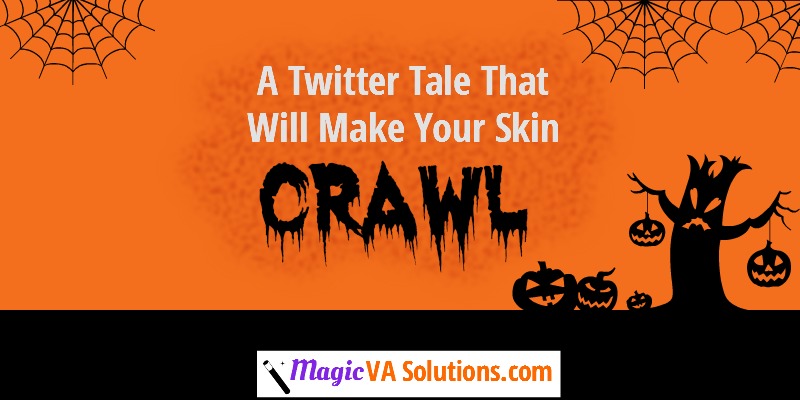 Just a bit of tongue-in-cheek fun for Halloween. Ever find yourself plagued with the spam and the visual noise coming from Twitter users who are there just to make a quick buck? If so, you might relate to this terrifying tale of Twitter.

Once upon a time, there was a savvy business woman, named Sarah, who recognised the value of being on social media to promote her small business. It was her first venture into the Twitterverse. She was filled with anticipation as she wondered what fantastic opportunities awaited her.

Her first encounter was with Bob. His profile looked interesting, with not an egg, but a smiling photo of a real person. Looking at his Twitter stream, he seemed to be knowledgeable and friendly. No sooner had she clicked on the ‘Follow’ button, when suddenly out of nowhere there came a ping notifying her of direct message in her inbox. Eager to read the message she had received, thinking that here was a real opportunity to connect, she was horrified to learn that it was simply an automated message from Bob, asking her to ‘like’ his Facebook page with the words “message sent by DMRobot” tacked on to the end. She clicked away as fast as she could. Ugh! How ghastly!

Then, she noticed she had a new follower. Her first follower! How exciting! His name was Jack. Clicking on the link to the Jack’s profile page, she was confronted by a barrage of words in his header image and bio, telling her to “Buy 10,000 Twitter followers for $1!” “Buy Twitter Likes now!” “Cheap Retweets” “Only $1”. Oh no! It was enough to make her skin crawl.

Wait a minute – here was another follower! Surely, this would be a real connection, not just someone trying to sell her fake followers. The person was named Karen and she had a lot of followers of her own, so she would know how to use Twitter, and maybe Sarah could learn a few things. She clicked ‘Follow’. Not much time had passed, and she noticed that the “Follows You Back” had disappeared from Karen’s profile. Really?! Karen just wanted to boost her own follower count?! What a gruesome thing to do!

Next, she came across someone who tweeted the same affiliate link over and over again. “Click here to reduce your man boobs”. How terrifying!

Another had 50,000 followers and only 1 tweet. Obviously a customer of Jack.

Then she saw someone whose entire Twitter stream consisted of “Thanks for the follow” to the various people who must have followed back. Utterly dreadful!

Just when Sarah wanted to run screaming from her office, vowing never to return to the Land of Twitter, she spied a notification alerting her to another follower. She looked at “Lisa’s” profile and saw that Lisa was engaged in conversations with a lot of different people. She shared amusing and useful things and seemed to be having a lot of fun using Twitter. Sarah clicked ‘Follow’ and tentatively sent a reply to one of Lisa’s tweets. A few moments later, Lisa replied back! Sarah and Lisa spent the next little while exchanging tweets, and it was the beginning of a beautiful twiendship.

Now when Sarah comes across people who use slimy sales tactics, sell Twitter followers and churn followers, she clicks past them and seeks out real people who want to connect, like what you’re meant to do on “social” media.

You can also find me here: